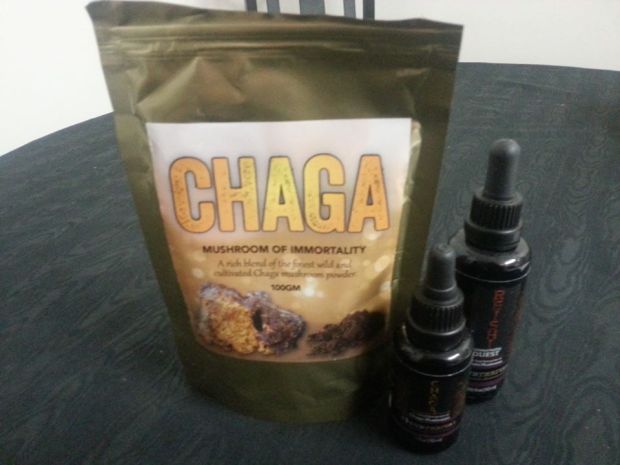 Chaga: king of the medicinal mushrooms and Reishi: the queen.

I think I should start by making it clear that medicinal mushrooms are very different to their more well known magic cousins. These guys don’t produce any hallucinogenic effects and are very safe. The only things that the two have in common are that a) they are both mushrooms and b) Australian customs won’t let either into the country. This has nothing to do with their chemical makeup and everything to do with the strict quarantine laws that prohibit organic food substances from crossing our borders.*

The two most powerful medicinal mushrooms are Chaga and Reishi, known as the king and queen of the mushroom world respectively. Both are adaptagentic, which means they help to create balance by changing their effect on the body based on what needs to be corrected. In other words, they help to regulate your body’s immune system. The active components in medicinal mushrooms are the long-chain polysaccharides, and these babies are essential for keeping your brain sharp. And who doesn’t want a sharp brain!

In Traditional Chinese Medicine, Chaga and Reishi are thought to increase your Jing. Jing is your primal life force, your essence. It’s the radiant energy you see in babies and young children and it depletes as we age. A decline in Jing is a big contributor to the low-level feeling of lethargy many adults experience. When I found that out, it resonated so strongly with my own struggle for energy I quickly realised that I needed to get on to medicinal mushrooms ASAP!

There are a few different ways you can include medicinal mushrooms in your health protocol. The easiest way is to simply get the powered form and use it as a basis for teas. The powder can be added to some water and simmered at a low temperature (you don’t want to heat it over 65 degrees because you will lose a lot of the nutritional benefits) for an hour.

You can add some raw cacao, mesquite powder and lucuma powder (all amazing superfoods in their own right), and almond milk to the tea to make a super-good-for-you hot chocolate. Chaga has a buttery caramel flavour, so it lends itself well to chocolate drinks. If you don’t want to use the tea straight away, you can let it cool and then use it as a basis for your smoothies.

If powders aren’t your thing, or you aren’t into smoothies, you can get both Chaga and Reishi in the form of an tincture (a tincture is just an alcoholic extract of plant or animal material). Tinctures are great for the time-poor because you just need to squirt some under your tongue and hold it there for one minute, to let it absorb through the tiny blood vessels in that area, before swallowing it.

I have so far been unsuccessful in finding an Australian maker of medicinal mushroom tinctures but, if you’re lucky enough to live in America or Europe (or really anywhere but Australia), you can order them from Daniel Vitalis’ site Surthrival.

I started taking Chaga and Reishi about six months ago and, within a week, I noticed that I had more energy. That increase in energy has stayed with me, which makes me so many kinds of excited and, in my mind, is more than enough of a reason to continue consuming them.

* If you want to check out Chaga or Reishi’s benefits for yourself and don’t want to risk losing them at the hands of customs, don’t despair, you can order them from Raw Power.