Here’s my conundrum: I am a card carrying member of the chocolate fan club but I sure as heck want to avoid the nasty side-affects I get from eating heavily processed, nutrient-deficient versions of chocolate. What to do?

The answer came to me a few months ago when I stumbled across This Rawsome Vegan Life, a blog, run by the beautiful Em, which is dedicated to the amazing world of raw vegan desserts. The first time I visited the blog, I lost hours clicking through (read: drooling over) Em’s creations. My mind was spinning with ideas!

Since then, I have attempted a few raw vegan treats with varying levels of success but yesterday I hit the jackpot. The chocolate jackpot. This Raw Paleo Snickers Bar was super easy to make and tasted phenomenal.

The only equipment needed is a food processor to whizz together all of the ingredients. 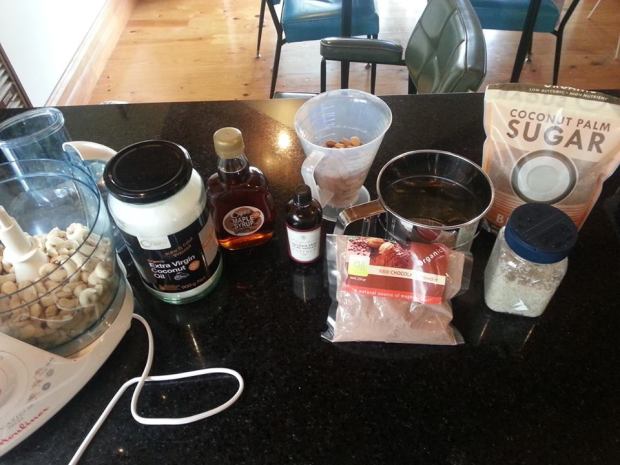 The ingredients (minus the Medjool dates, which are sitting just outside of the shot).

The recipe says you can use macadamias for the caramel layer but I chose cashews because I had some available. Macadamias would make the caramel really creamy though so I think I’ll use them next time. 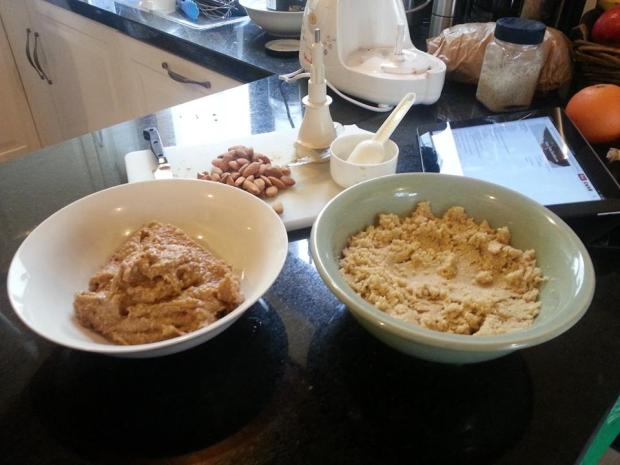 Once the three main elements (the caramel and base layers, and the chocolate) were finished, I began assembling it all. 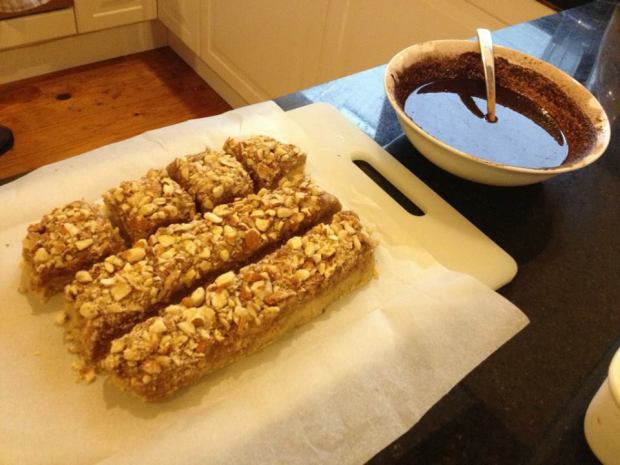 Tip: use a hot knife to cut through the slice.

I had to stop midway through to conduct some quality control tests.

I think I could have made the portions a bit smaller to make the finished product last longer… Ha! Who am I kidding? It still would have disappeared just as quickly. I would have made up for the smaller sizes by eating twice as many portions. I’m only human after all. 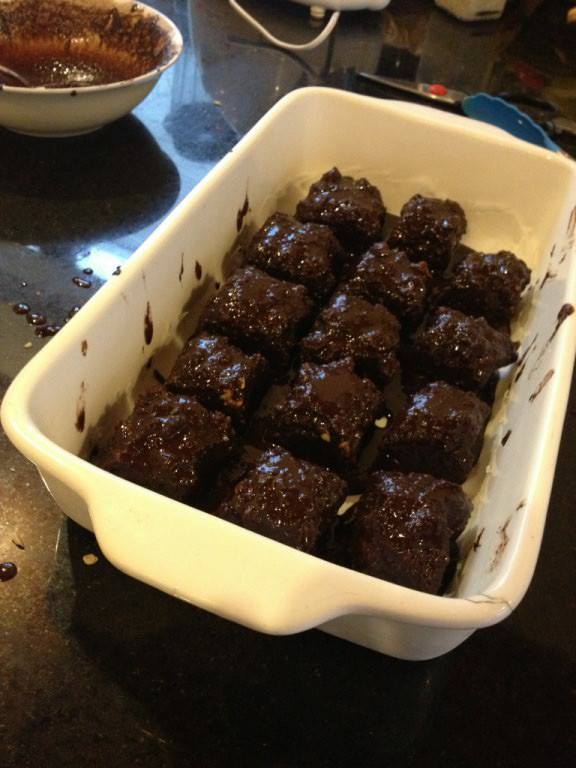 Coated in chocolate and ready to go in the freezer.

Once the chocolate layer was on, I popped the bars in the freezer for an hour (#longesthourofmylife) and then they were ready to be eaten. And eat them I did. My gosh.

I’m still coming down from a raw Snickers-induced high.

The best bit? There is one more left for my morning tea tomorrow. Monday just got a whole lot more bearable. 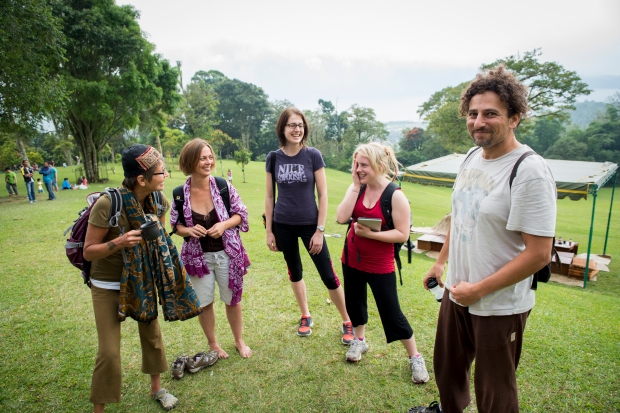 With some of my fellow Wolfe Pack members

Nine months ago, while scrolling through my Facebook feed during my lunch break, I saw a link to David Wolfe’s page that said, “We’re headed to Bali, Indonesia for a once-in-a-lifetime journey into the EXOTIC! You can join us! The Balinese are EXTRAORDINARY people.” Intrigued, I clicked on it and, after reading through the itinerary, I knew it was something I had to do.

Seven months later, I was boarding a plane with one of my favourite wellness girls, Elsa, about to embark on our adventure. ‘Excited’ doesn’t even begin to explain how I was feeling.

OK, let me explain. I have been a David Wolfe fan since I saw him speak in 2011. His knowledge about the health world is phenomenal. He helped bring the word ‘superfood’ to the common vernacular. He spread the word that chocolate, in its raw form (otherwise known as cacao), is good for you. For a chocolate-loving girl, this was the best news ever.

I had also never been to Ubud, Bali, so I was looking forward to checking that out too. With its lush green scenery, beautiful people and stunning food, it didn’t disappoint!

I must admit I was nervous about meeting our fellow David Wolfe Adventure buddies (affectionately known as the Wolfe Pack). What if they were all strict raw-vegan, yoga-pro got-this-life-business-sorted people? The kind that never put a (bare) foot wrong and only associate with others who have unlocked the secret to life? What if they thought I wasn’t healthy enough, vegan enough, raw enough to be included?

What if they thought I wasn’t healthy enough, vegan enough, raw enough to be included?

As always, when I worry about this sort of thing, the Universe has a quiet laugh and proves me wrong in more ways than I thought possible. Every member of the group was lovely!

The diversity of beliefs and approaches to health blew me away. Prior to the trip, I had thought I was stepping into an environment where there would be a dogmatic only-raw-vegan food allowed rule. I had images of secretly ordering poached eggs as room service to avoid the judging eyes. I’m very glad to report I was wrong about that too. While we all ate a mostly raw vegan diet (because with such phenomenal food being prepared for us daily why wouldn’t we?), there was absolutely no pressure to eat that way for every meal. And, boy was I glad.

Now, don’t get me wrong – I love my green juices, smoothies and flax crackers as much as the next health nut but an entirely raw diet just doesn’t agree with me. Throw in a slice of bread, some sweet potato or a couple of eggs though and I will thrive. In the Ayurveda system, I am a text-book case of Vata dominance. Amongst other things, this means that I do best when I include heavy grounding foods in my diet, and don’t do so well on too much salad and cold foods. (If you would like to find out more about the three Ayurvedic body types, click here for a simple introduction.)

Sometimes I’m really good at ignoring what my body tells me, in favour of listening to my head (or my fears). The first couple of days of this trip were no exception. For fear of being judged, I ate only raw food meal in meal out and by the end of the second day, I was beginning to feel the effects. I was irritable, lacking energy, and feeling really flighty and anxious.

On the third day of the trip, we woke up at 2am to hike for three hours up Mount Batur (home of the Kintamani Volcano) so that we could watch the sun rise. We got to the first observatory area after about two and a half hours of hiking, which was a massive achievement in itself. I could see that the top of the mountain was tantalisingly close though and, when someone said we had the option of hiking to the very top, I quickly agreed. Heck, I hadn’t come all that way only to stop just short of the peak! 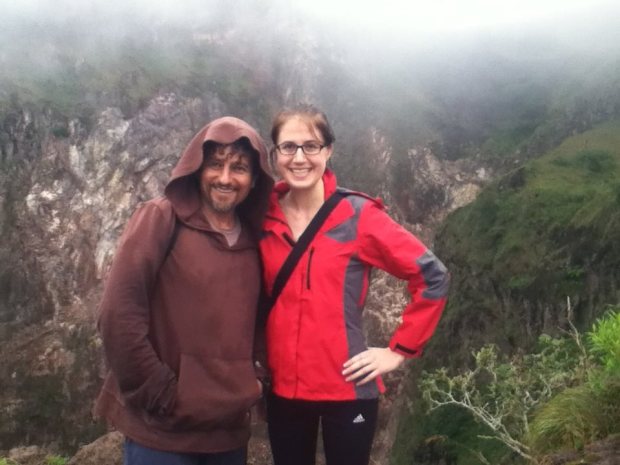 With David Wolfe at the first observatory area of Mount Batur.

The final climb was certainly intense. The volcanic ash hid sharp rocks and deep holes, making for a treacherous journey but it was worth every tentative, carefully placed step. Even though there was so much cloud cover we didn’t actually see the sun rise, the sense of achievement I felt when I stepped onto the summit was exhilarating. It was so worth it!

After hiking back down the mountain and having a much deserved soak in some hot springs to soothe our abused muscles, we jumped in the bus to make our way back to the hotel. For the entire journey home, my imagination taunted me with images of soft poached eggs, grilled tomatoes and crunchy sour dough. By the time we got to the hotel, I was completely consumed with the idea of a hot protein-rich meal.

As so often happens, Elsa was thinking the same thing as me and when she mentioned, in passing, how much she would love to have some cooked eggs, I grabbed the opportunity (or the kitchen’s phone number, as it were) and called the kitchen to put in a special request for dinner that night.

It was exactly what I needed to replenish my protein levels. Within an hour of eating dinner, I could feel my energy returning and my mood stabilising.

By the time breakfast came around, I was dying to chow down on a raw meal of fruit salad and a green juice. It’s all about balance, baby.

It’s all about balance, baby.

I always knew on a theoretical level that listening to my body was important but the trip really cemented this for me, and this knowledge has definitely changed my approach to food. Before eating anything, I now ask myself whether it will not only nourish me but whether it is what I need in this moment. So far, I have switched from soy lattes to black coffee because I finally listened to my body’s message that soy products are bad for it (that’s a whole other post), and I have started eating more eggs (only from happy chickens, of course).

I am thankful every day that I finally learnt to trust my body’s messages. It makes choosing the right food a much easier process – and, as you will find out, I’m all for anything that makes life easier!